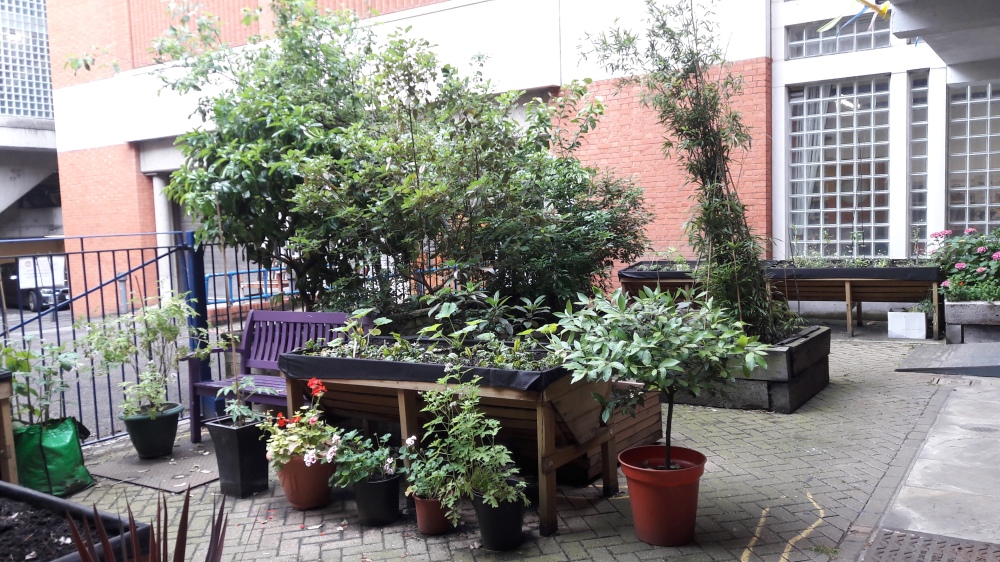 SHP was awarded the Innovation Fund to create a vibrant therapeutic community garden space at the Abbey Centre.

SHP delivered a gardening group at the Abbey Centre following project commencement. The sessions ran weekly on a Wednesday from 11:00 am-14:00 pm. The groups was delivered from Spring-Winter 2018.

The space was tended to by volunteers from the Westminster community- volunteers were recruited from Abbey Centre members, as well as clients from SHP. Attempts were made to recruit from further afield too. Five people volunteered their time to support the development of the garden space, with a couple of regular attendees ensuing continuity.

A support worker from SHP – with extensive experience working as a horticultural therapist  acted as the coordinator for the project and ran a session each week, on a Wednesdays.

Activity plans were devised to enable the volunteers to have a structure to their work and enable people to attend the Abbey Centre on other week days and work on the garden space without the direct supervision of a staff member.

An event was planned in August to promote the use of the space, the volunteering opportunities and to encourage centre members to make use of the outdoor space and take advantage of the opportunity to spend time in a relaxing, therapeutic, green environment.

The over-arching aim of the project was to create a vibrant therapeutic community garden space at the Abbey Centre with the input of volunteers. With the support of CGL, Turning Point and the Abbey Centre we were able to achieve this.

SHP said having two volunteers regularly attending and five volunteers in all represent a successful project. Beyond the volunteer attendance, there has been the benefit to the centre of having a well looked after and inviting outdoor garden space, which has a positive impact for all Abbey Centre members.

SHP runs a weekly social group from the centre, with an attendance of 6-12. Attendees look down on the garden from the balcony and can spend time in the garden.

The Abbey Centre advertised a lead volunteer position within their contacts. The intention was for the recruited person to work alongside our horticultural therapist, gradually taking on more responsibility before eventually leading with the weekly upkeep of the garden to make it a sustainable programme.

SHP fed back “We held a final review meeting with the Abbey Centre in March, where we handed over to them. Suggestions were offered in terms of how to sustain the improvements made to the space. Those provided included tapping into the local schools (there is a primary school overlooking the centre) who may be keen to support a local green space, especially with the added emphasis of educating people (young and old) about climate change. There are specialist educational routes such as Capel Manor College. Additionally there is guerrilla gardening and other initiatives that may support the centre to continue developing its green space. The Abbey Centre will now take this forward and look to secure sustainable support”.

SHP informed us on the 13th June 2019 that the volunteer lead at the Abbey Centre has now confirmed they’ve now secured the support of volunteers to carry on with gardening sessions. SHP stated “This is  really encouraging and will hopefully mean it will continue to be as great a space for the local community as it is now”.